Phonies. The human species is full of them. I’m deeply disturbed when they entered the public domain and exploited the Internet to spread their bullshit.

A couple of weeks ago I stumbled upon the Wikipedia entry of Dr. Manahel Thabet (Update: as of late 2015, it is now deleted). 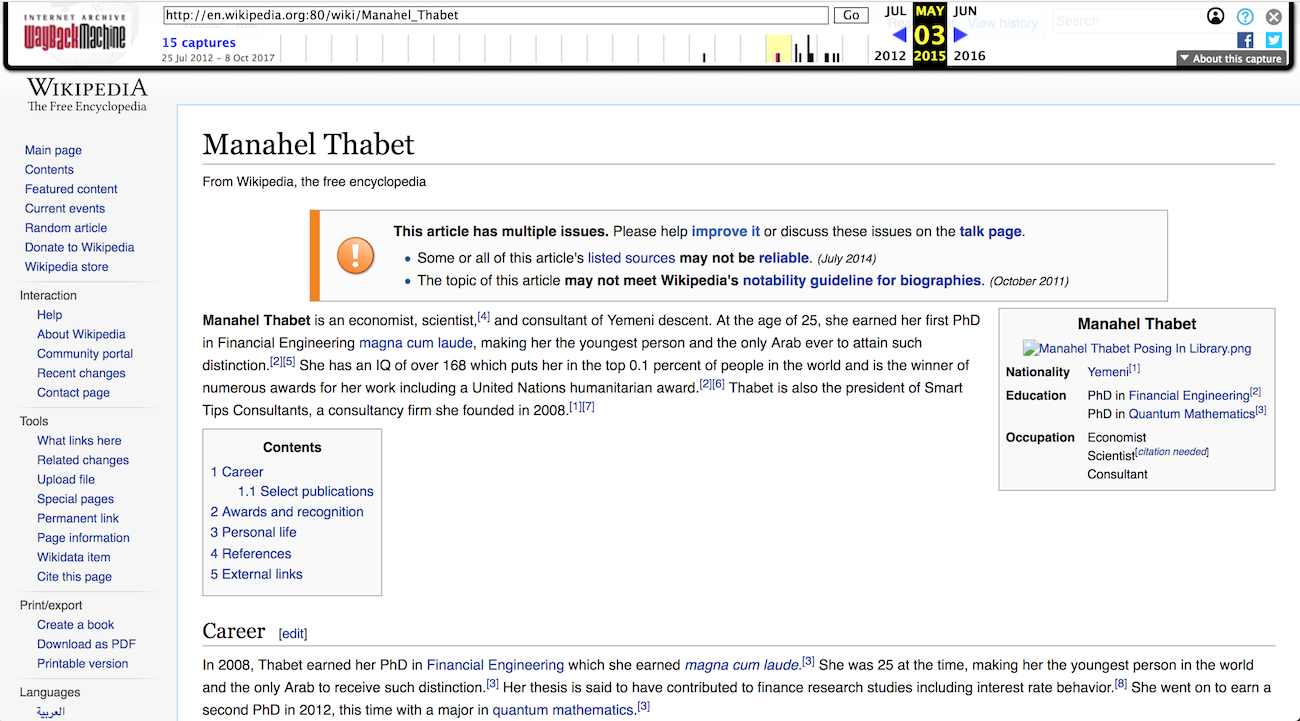 Goolging her name showed that she has really great PRs. She even has a verified twitter account with 50k followers.

Update: Oh, and an appearance on the front cover of Arabian Business! (Image taken from an article by a Dubai blogger posted later this month) 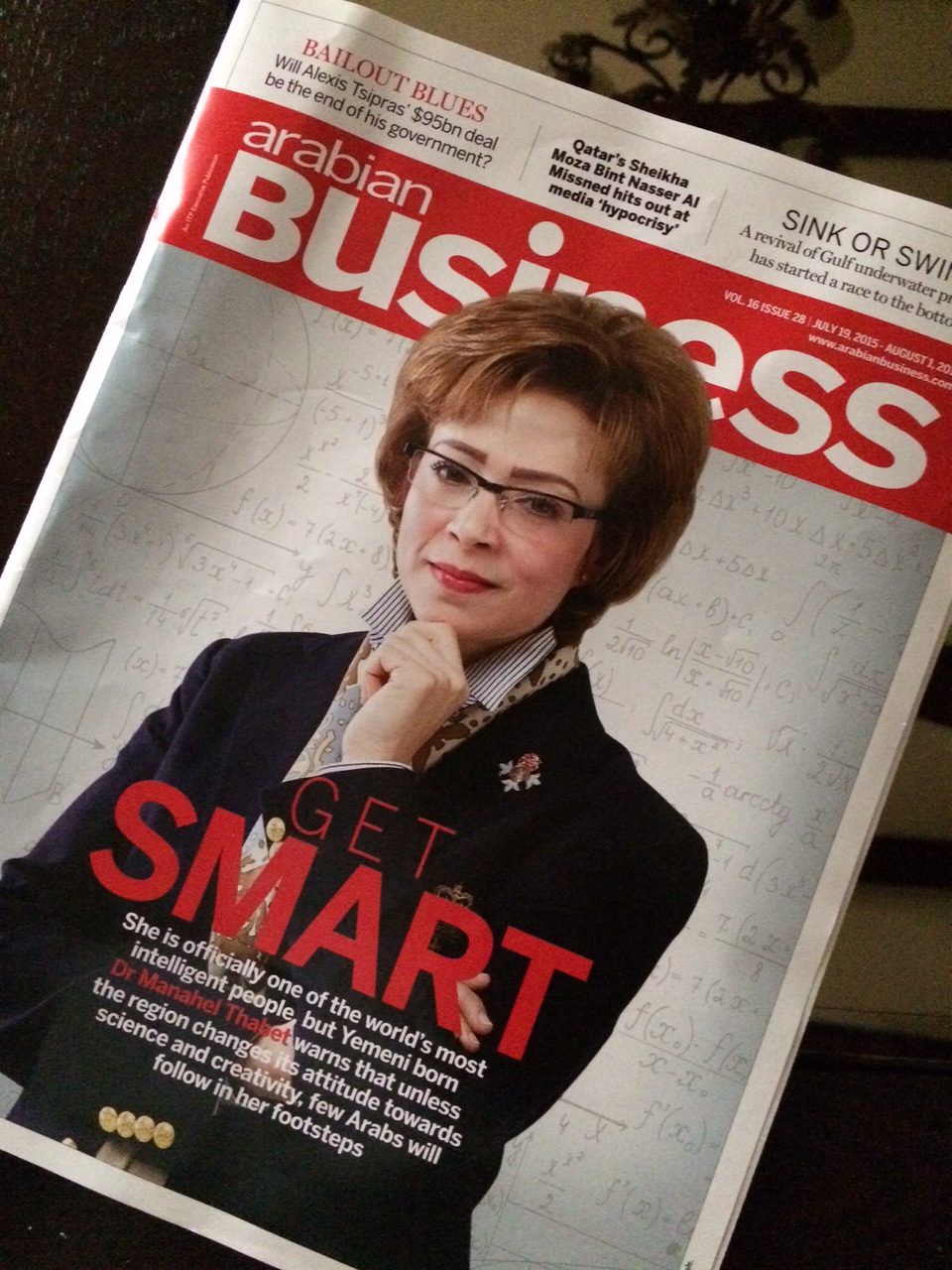 But her achievements often sounded far-fetched. She had allegedly successfully predicted the 2008 financial crisis using a formula as reported by Forbes Middle East (Update: as of 2016, the article has been taken down ) and developed a formula to “measure distances in space in the absence of light” which had supposedly taken the world by storm as reported by Gulfnews (Update: as of 2016, the article has too been taken down too).

All claims made in the Wikipedia entry were supported by either news articles from presumably paid-to-write sources such as arabianbusiness.com, or crappy websites like World Genius Directory, iqsociety.org and kauzala.com. 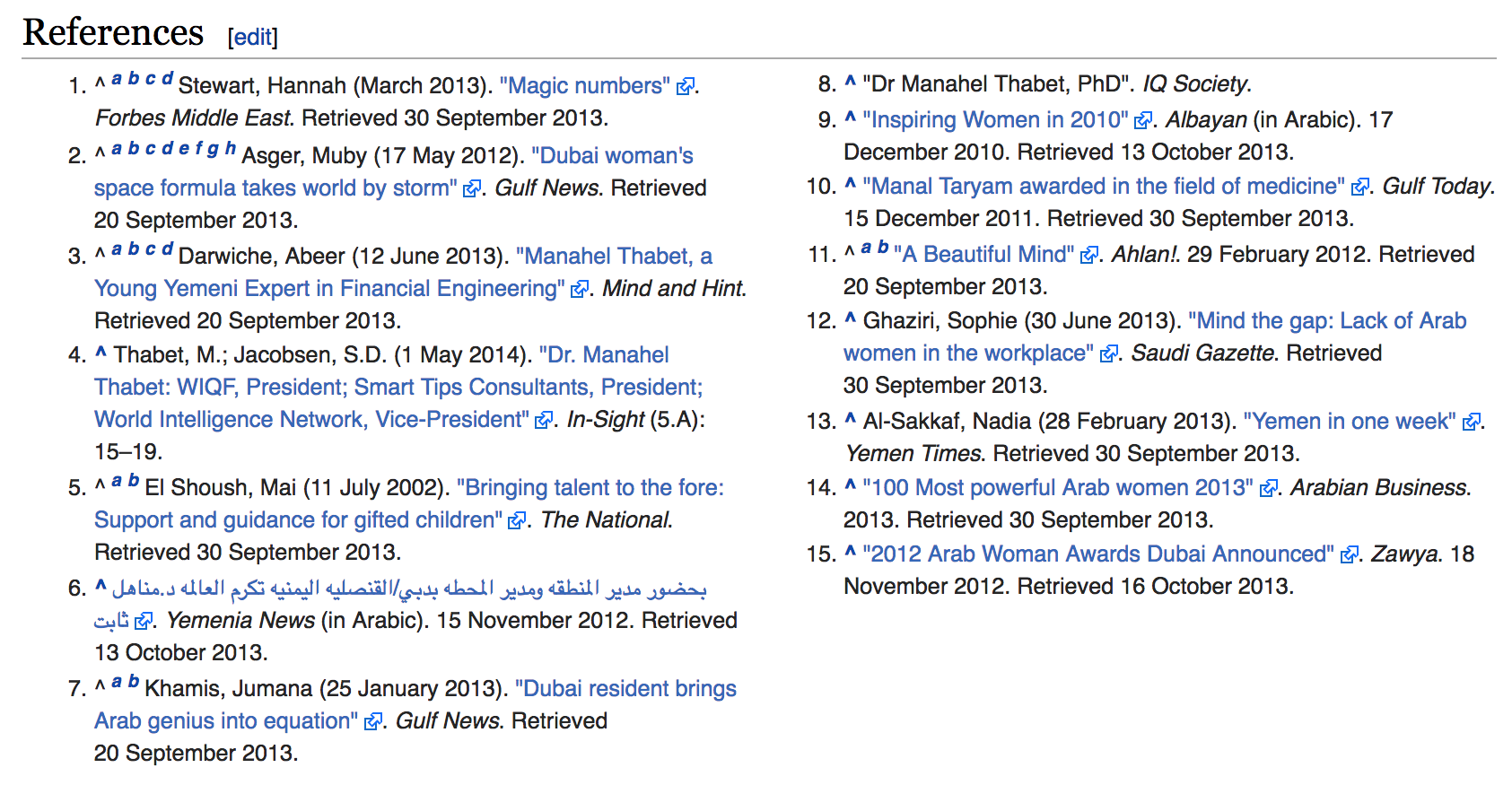 I was highly skeptical about the whole thing. She felt more like a con artist. I should ask people on StackExchange about it, I thought. So I posted the following question: “Did Manahel Thabet develop a groundbreaking formula to measure distance in space without the use of light?”. 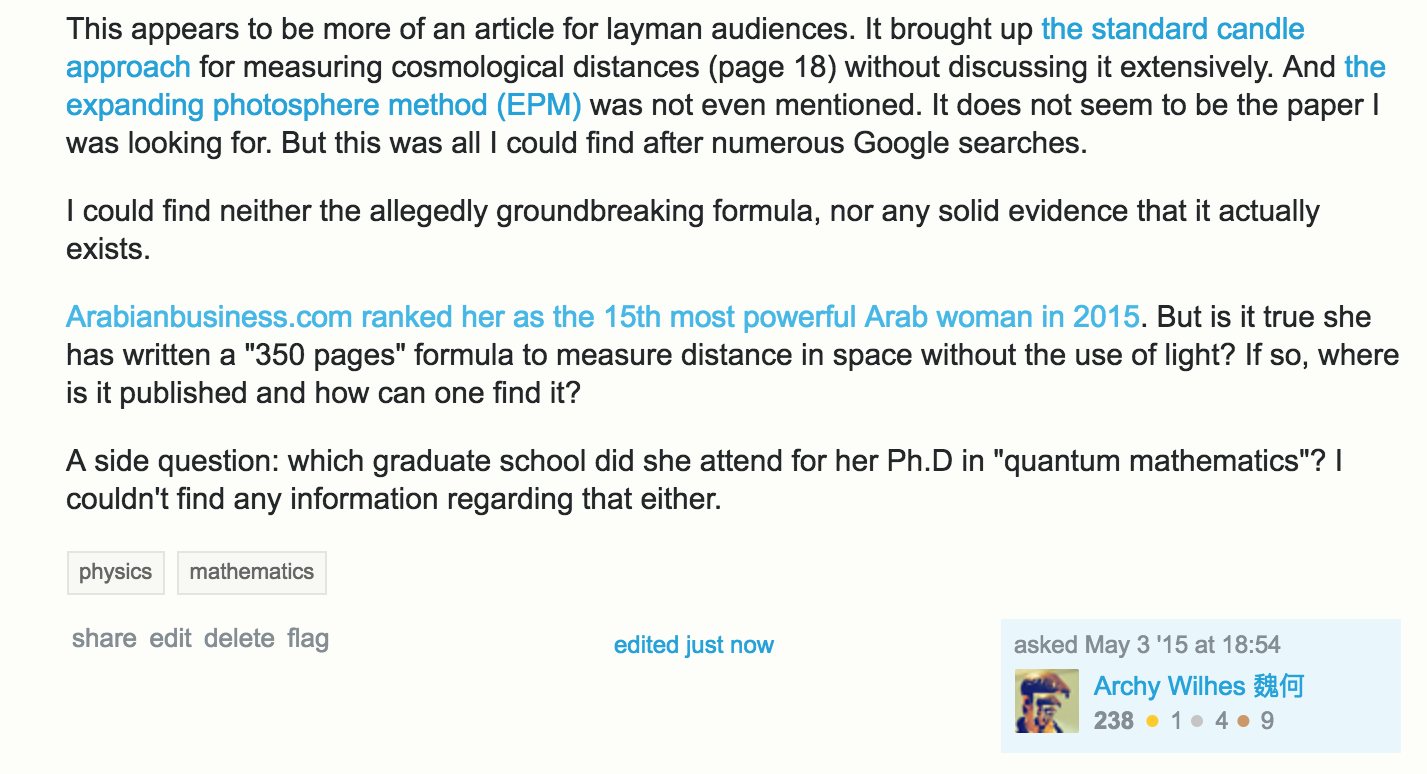 It managed to gain quite some interest and more people got into the investigation which eventually led to the deletion of her Wikipedia page. Great work, vigilantes on Skeptics.SE! I then submitted the post to the following subreddits: /internetbullshit , /skeptic, /quityourbullshit, and also cross-posted it in the subreddit /IsItBullshit.

A few weeks later, the subreddit [/IsItBullshit] and Skeptics SE posts both made their way to the first page of the Google search results for Manahel Thabet in the shadow of the Wikiepdia entry which had been labeled “blatant hoax”.

Many people dived in deeper. 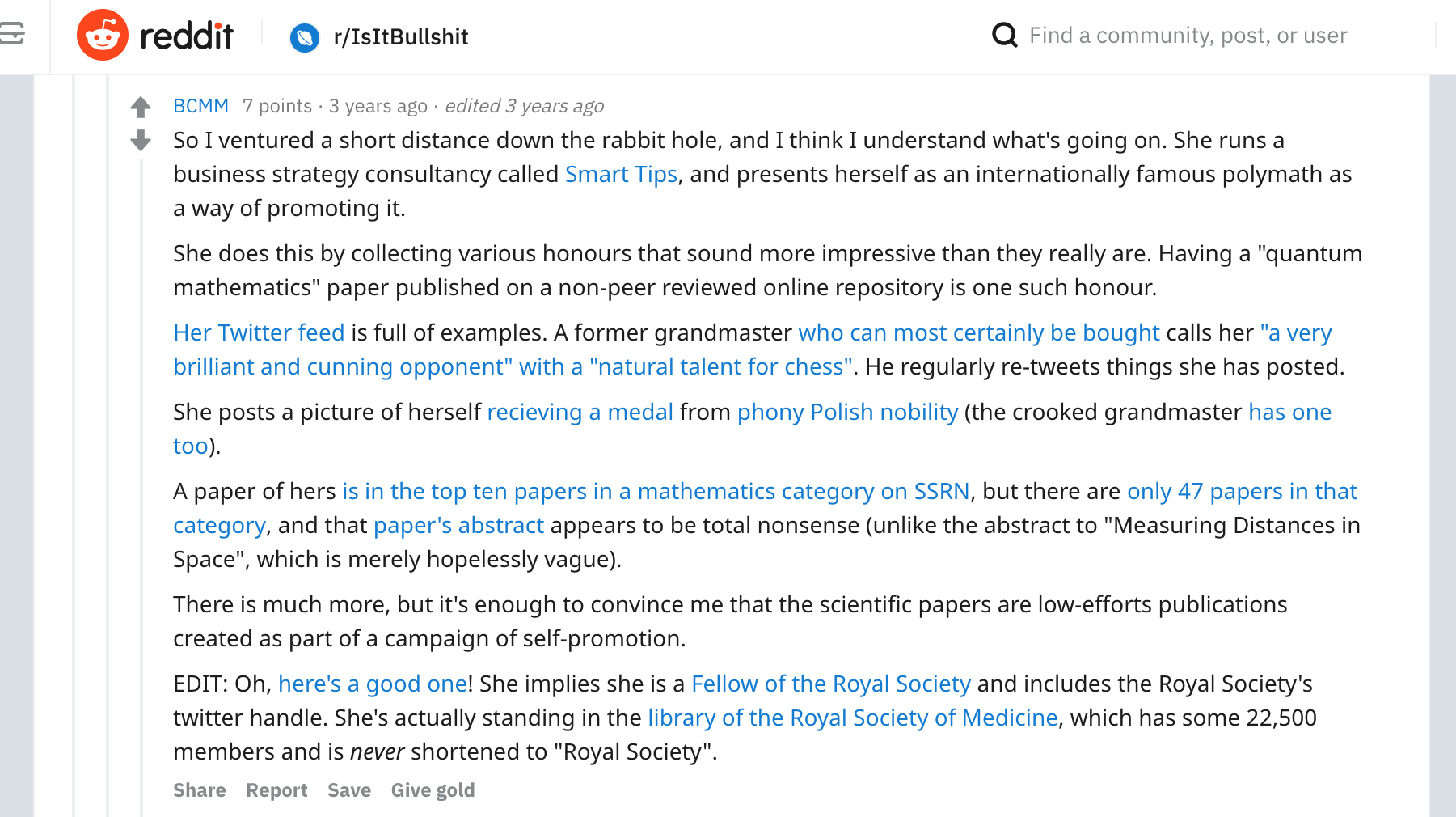 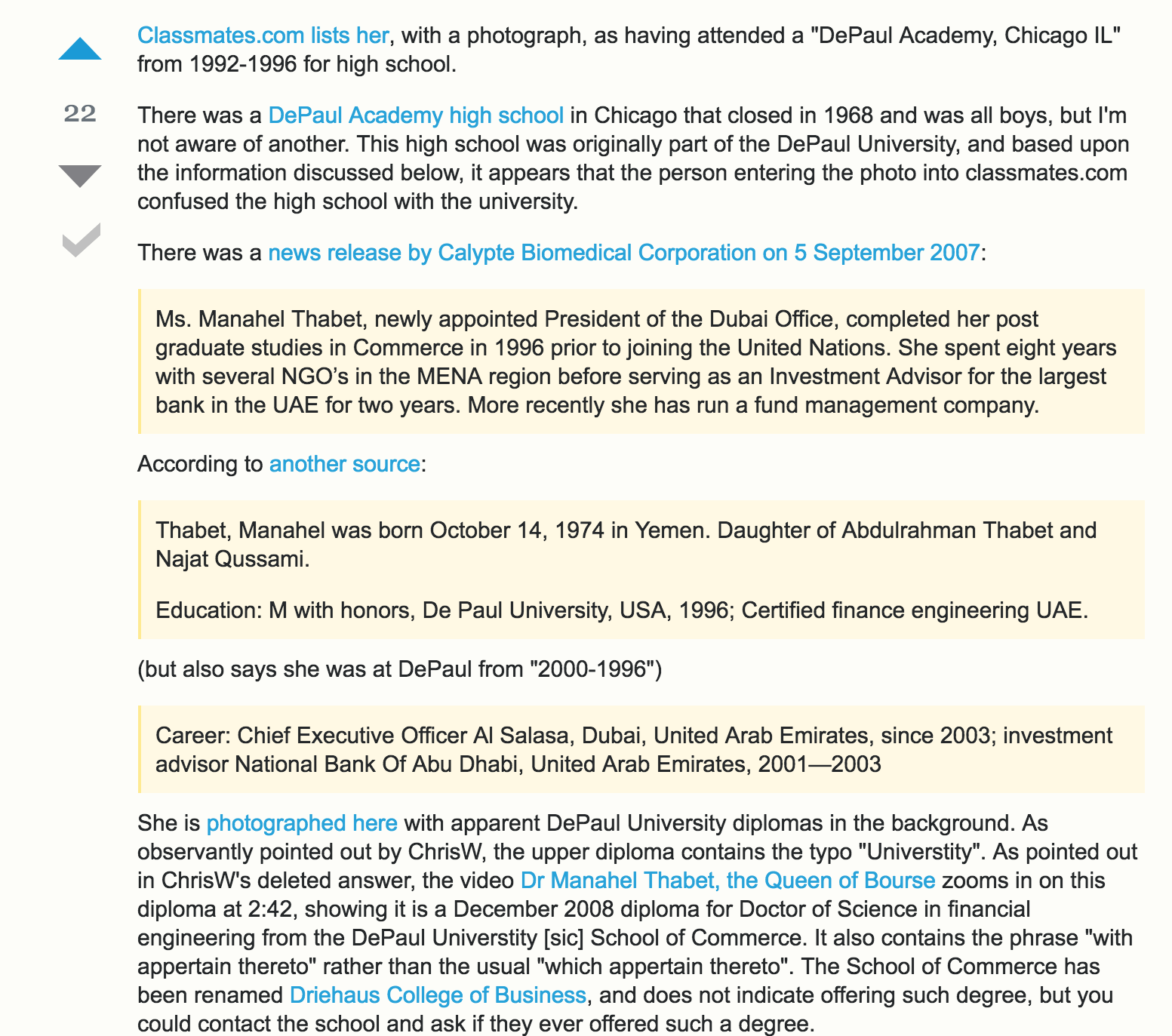 Internet is a wonderful place.

Fun fact: I just tweeted this article and mentioned her (@manahelthabet) in the tweet. I think she is going to block me like what happened to the guy who asked her about the supposedly ground-breaking paper on Twitter. 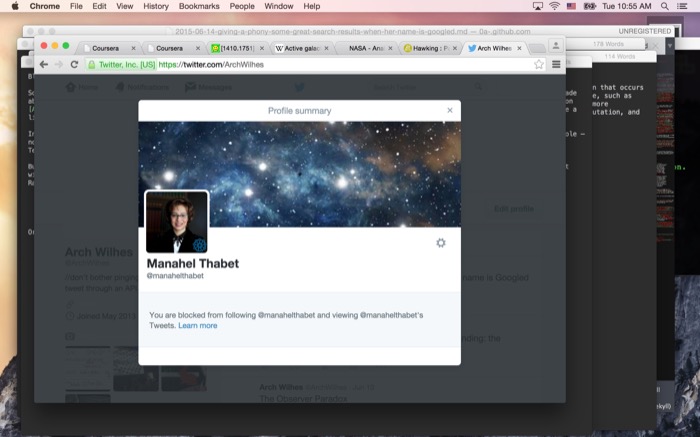