Archy Will He
About
Posts
Questions
Research & Books

Calculus Explained with pics and gifs

Among the things I managed to teach myself after dropping out of school at the age of 16 was calculus. Before I knew what calculus is, merely hearing its name gave me the impression that it is one of the most complicated things in maths, and that I could not possibly learn it by looking into the freely-available resources online.

It turned out that back then I had a rather naive view of what mathematics is about. Understanding calculus is not hard at all. It is simply a matter of whether you have stumbled upon the right resources to learn it. If you have difficulty understanding it, you are probably learning it the wrong way.

I am nowhere near being an “expert” in calculus (or anything like that). I don’t really apply calculus to solve problems on a daily basis. To put it bluntly I am just a kid who writes about things he knew by heart so it may be used to help with those who are having a hard time learning it.

Calculus is just a fanciful name for the study of change in maths. Calculus in general refers to the branch of maths that was made famous by Newton in the 17th century. Don’t confuse it with Lambda calculus, propositional calculus, and unicorns, which are completely different things.

To understand calculus, one needs to be able to visualize the concepts of function, limit, differentiation, and integration.

A function can be seen as a machine that takes in value and gives you back another value. It is what we use in maths to map numbers (input) to other numbers (output). 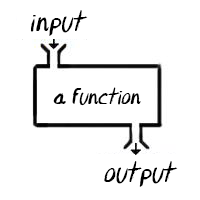 A function is normally defined by an equation like this:

Now if you put 2 into this function you will get 12 in return.

The set of numbers that you can put into a function is known as the domain of the function. If you’d like to have a more in-depth understanding of function (e.g. its formal definition), check out my article on set theory. (You will probably love it!)

A limit is the number you are “expected” to get from a function (or algebraic expression) when it takes in a certain input. By “expected” it is referring to the expectation of the output when \(x\) “approaches” a certain value.

Here is an example where the limit (the expected output) is the same as the actual output.

Now take this function for example:

Division by 0 is undefined. We would get \(undefined\) when we put 3 into the function. 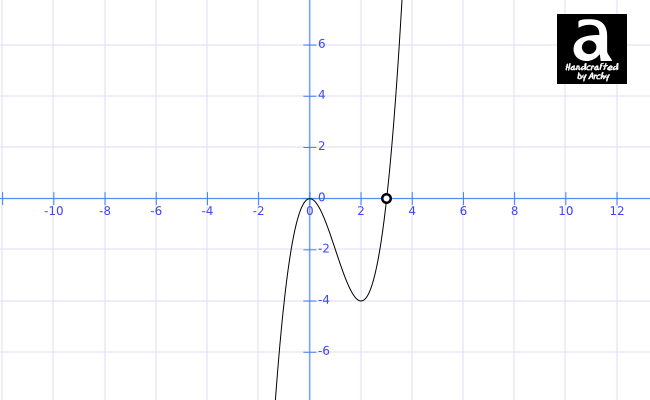 But looking at the graph, we can see that 0 is the expected value when \(x\) approaches 3.

To compute the limit when the actual output is undefined, in normal case we simply need to simplify the algebraic expression to avoid division by 0. And then put the value \(x\) is approaching into the function as \(x\).

Differentiation is a fanciful name for the process of obtaining a derivative. And a derivative is a function that gives you the “slope” (or rate of change) of another function at a certain point.

Basically, differentiation can be seen as a machine that takes in a function and gives you back another function. 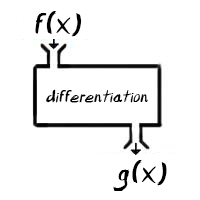 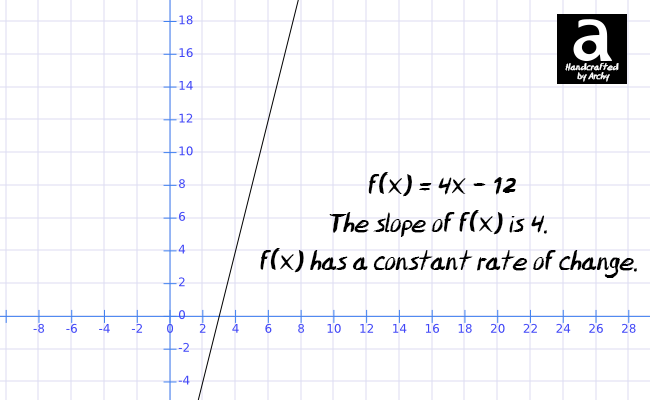 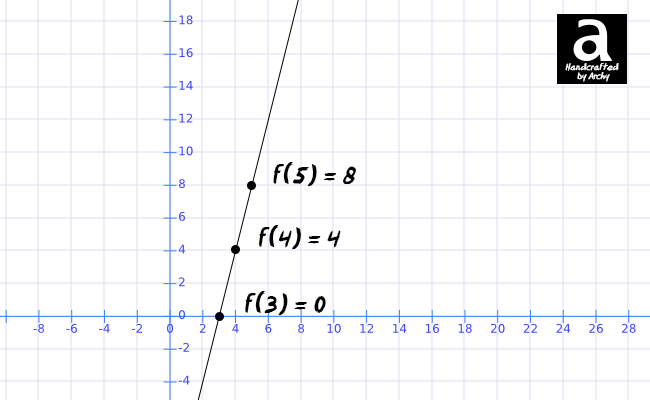 But this is only true for linear function. For functions that are not linear, every point doesn’t have a constant rate of change. Take a look at the function \(f(x)=2^x\). 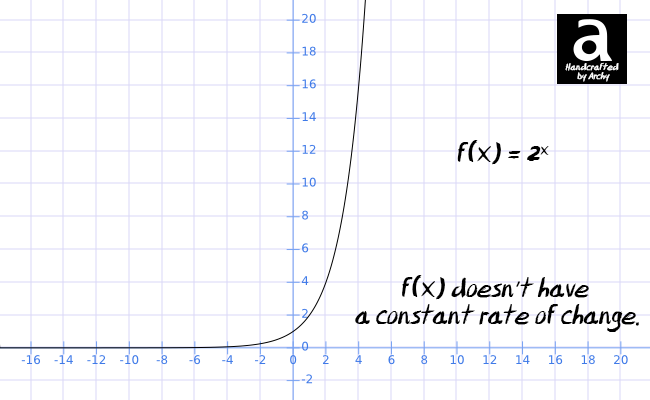 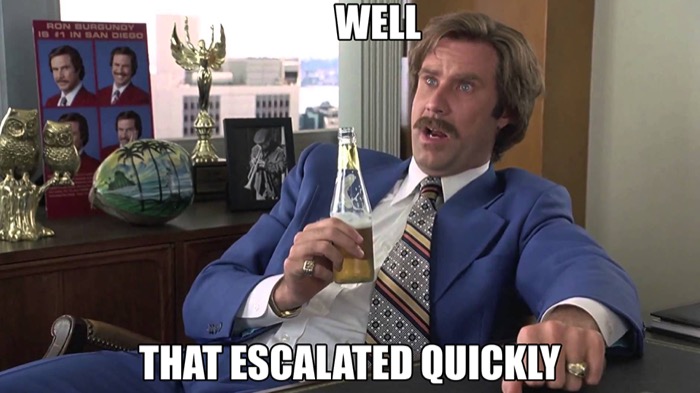 This is when we cannot use a constant to represent the “slope”: we need to use a function that gives us different “slope” (rate of change) at different point. Or rather, we shouldn’t even call it a “slope” anymore since the rate of change is not constant. We call it derivative.

4. How to find the derivative of a function?

The rate of change at a certain point in the function can be visualized as a straight line across the point. 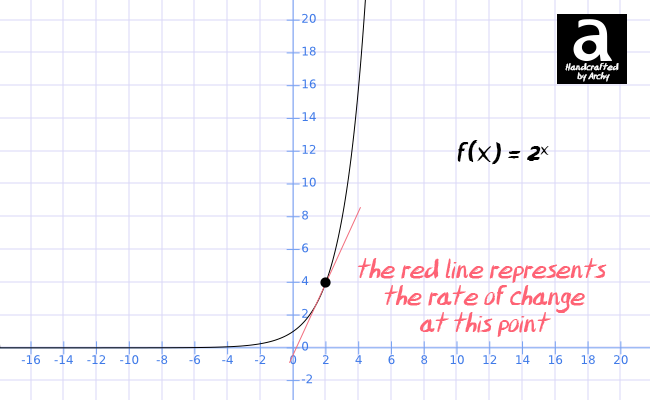 This is normally called the tangent line at a certain point.

Since a non-linear function doesn’t have a constant rate of change, it means that every point of the function needs a different straight line to represent the rate of change. 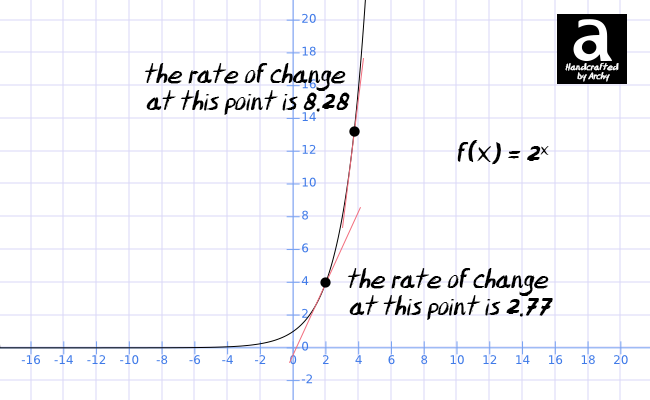 To find the derivative of a function is to find another function that will output a value at every point, which can be represented by a corresponding straight line.

To get the straight line that represents the derivative at a certain point, one way to do it is to first locate 2 different points on the graph and draw a line across them. 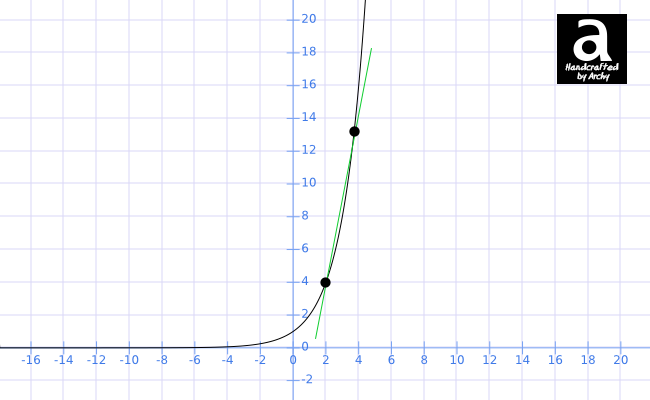 Some people refer to this line as a secant line.

This line represents a value. It represents the rate of change if the 2 points belong to a linear function. 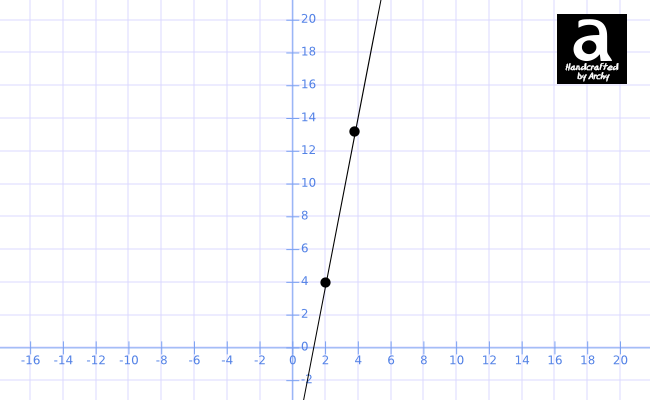 But now this function is not linear. So this line is not accurate at all if we try to use it to represent the rate of change at any one of the 2 points.

Apparently, the closer the 2 points are, the more accurate the line is in representing the rate of change at any one point. 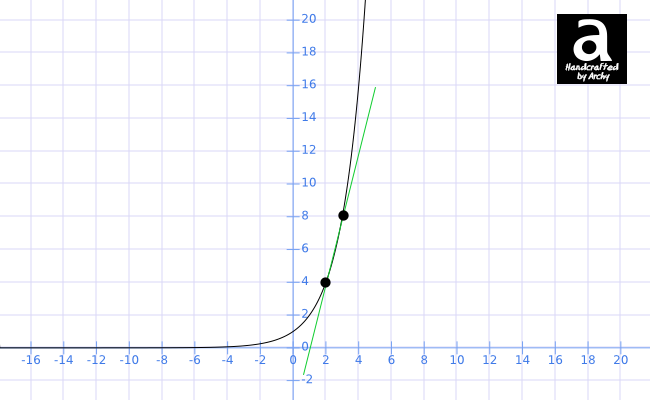 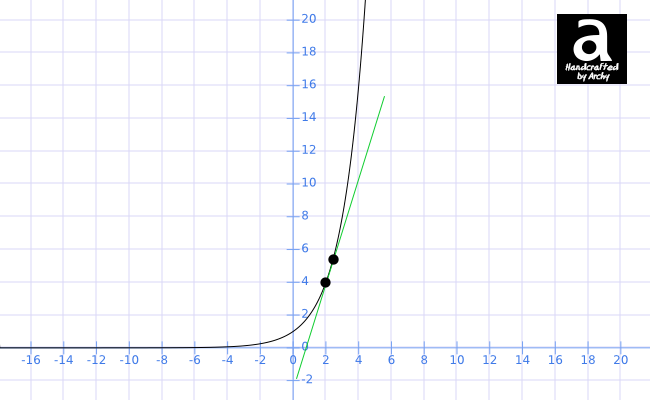 This is the modern definition of derivative in terms of limit.

Besides \(f'(x)\) [aka Lagrange’s notation], here is another common notation for differentiation:

We call this way of thinking about derivative non-standard analysis.

Let’s say we want to get the derivative of \(x^3\). The straightforward way to do it is to compute the limit.

But we can speed up the process by using shortcuts like this.

Here is a list of famous shortcuts for differentiation.

These shortcuts can all be derived from the limit of \(\frac{f(x+h)-f(x)}{(x+h)-x}\) above. They are sometimes referred to as “differentiation rules”. Calling them “rules” certainly makes them sound like some fundamental principles in calculus, but the truth is they are merely shortcuts to speed things up. 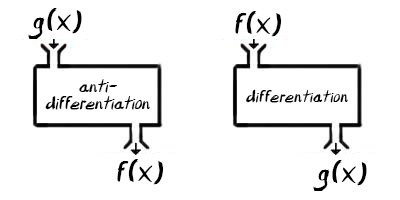 Apparently, we will get the same derivative when differentiating functions that are only different at the part where it adds (or subtracts) a constant.

As shown above, we can see that no matter what the constant is, it would always give us back the same function if we differentiate it. So, in order to be technically correct, we would need to put a placeholder, \(+ C\), in the end of the function to indicate that the anti-derivative can be any function that plus some constant (or minus some constant for cases when \(C\) is negative).

Indefinite integral is fundamentally equivalent to anti-derivative. They are basically the same thing. 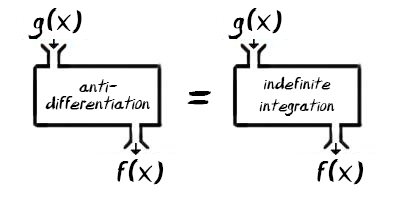 This is shown in the first fundamental theorem of calculus.

Definite integral can be defined as the difference between 2 identical anti-derivatives that take in different inputs.

This is often read as “the definite integral of g(x) from a to b”.

This definition of definite integral is derived from the second fundamental theorem of calculus.

Here is another way to define what a definite integral is. Imagine you want to find out the area of the region under a curve in a graph. 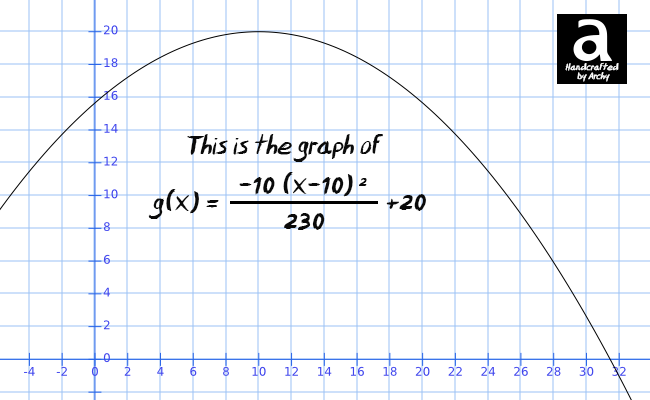 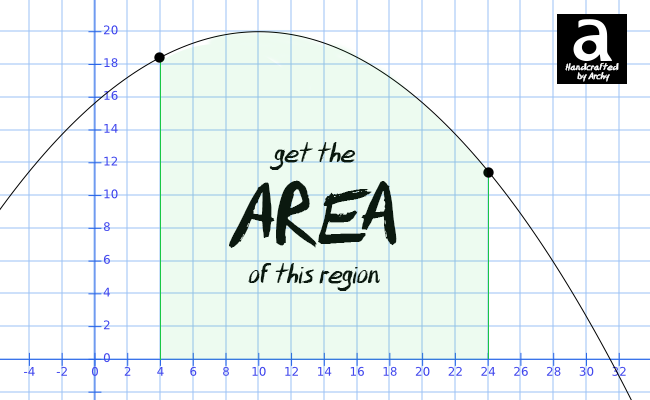 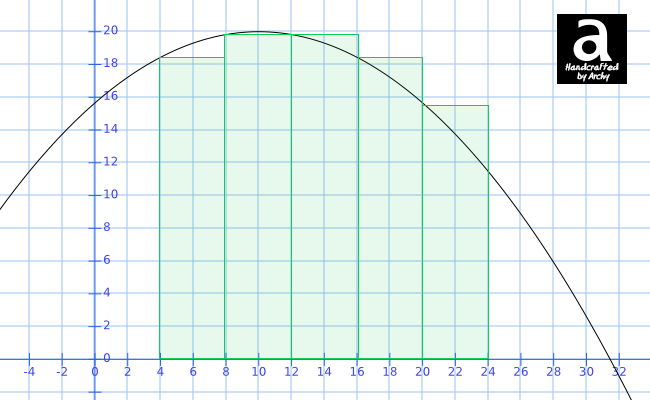 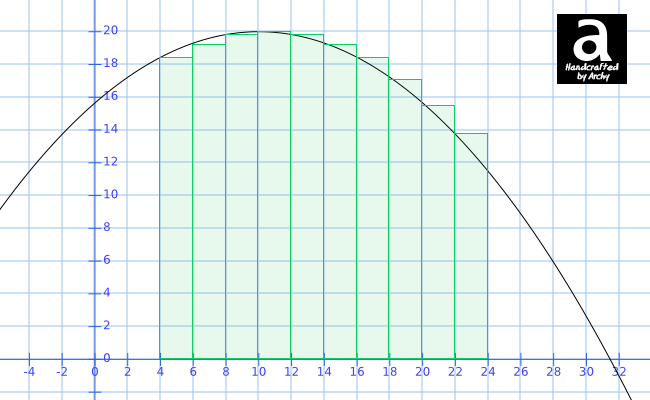 This can actually be written into a summation. Here \(n\) is the number of rectangles.

We would be able to find the actual value for the area if we get the limit as \(n\), the number of rectangle, goes to infinity. Infinity here can be imagined as a theoretically enormous number that is bigger than every real number on the number line. This limit is another way of defining definite integral. 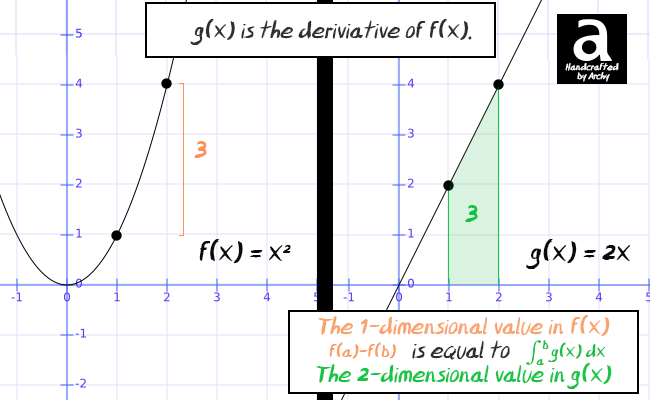 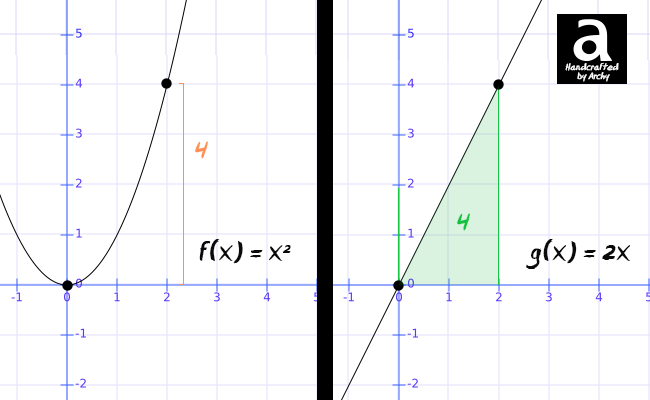 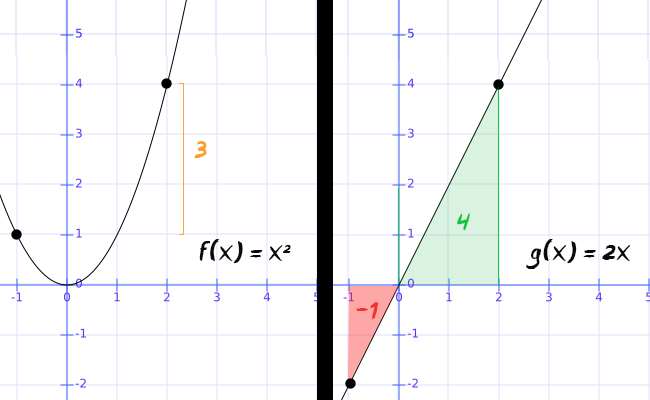 indeterminately1: this is why it is called indefinite integration. We are getting a result in terms of a variable, rather than getting an actual value. summing up2: this is what \(\int\) indicates in the notation. nonspecific3: thus it is indefinite integration. What matters is the relation in terms of \(x\), not the actual value. \(y\)4: this \(y\) is the \(y\) from \(g(x)\).


8. How to find the indefinite integral (anti-derivative) of a function?

Things don’t always come in a perfect bundle. To use reverse-chain-rule, most of the time we need to see the algebraic structure as \(f'(g(x))\) and compute \(g'(x)\) on our own.

Here is an example. Let’s say we need to solve this indefinite integral.

This technique (reversing chain rule) is known as integration by substitution, or, \(u\)-substitution, where \(g(x)\) is often written as \(u\).

When a function has more than one input value, we call it a multivariable function.

To differentiate functions like this, we find the derivative with respect to one of the variables (denoted by \(x_i\) in this case). This type of derivative is known as a partial derivative.

added on 29th Oct, at 5PM (SG Timezone, +8): [edited a couple of times around 8 30PM to express the idea of tangent space in a more clear and concise way. And corrected some mistakes I made in the analogy of tangent plane.] Upon differentiating the function, we need to replace the remaining \(C\) back with the corresponding variables.

Basically, \(\frac{\partial}{\partial x} f(x,a,b,c)\) tells you about how an infinitesimal change in the input \(x\) would affect the output \(f(x,a,b,c)\) when \(a\), \(b\) and \(c\) remains unchangeable. To get the numerical value for the derivative, it is sometimes necessary to put an actual value into these variables.

In normal differentiation (single-input functions). To obtain a numerical value for the rate of change at a certain point is to obtain the slope of the tangent line at that point: there is only 1 slope because there is only one single line going across one single point, \((x,f(x))\). To do it we just need to specify \(x\) since \(f(x)\) is only dependent on \(x\).

The same applies to tangent of higher dimensions.


If you are interested in learning more about calculus, check out Calculus One by Jim Fowler on Coursera. It is truly amazing for beginners. For courses that cover more advanced topics in calculus and other areas of maths that use calculus, check out the ones by MIT OpenCourseWare. You’d probably find Pauls Online Notes useful too.
Archy Will He 何魏奇 © 2021 @ArchyWillHe